After working solidly on Memoria Histórica for three or so years I felt its narrative was complete. It had left me spent but I also believed it had reached its natural end. I now had the chance to re-examine an idea that had lain dormant for almost two decades.


In the late 1980s while working as a bookseller in Edinburgh I was introduced to the work of Orcadian writer George Mackay Brown. His writing has intrigued me since then.


The first volume of his poetry I read was the first of his published collections: The Storm from 1954. In the opening line from Prologue, "For the islands I sing . . ." I smelt the salt sea and heard the cry of gulls. And when I read on, I felt his love and pride for the islands. In other poems from The Storm - or later volumes of poetry - and in his short stories and novels I saw in them a wonderful buoyant and, at the same time, dark imagery.  For one reason or another I did not take the idea of illustrating the work further, and, looking back, I am pleased that I had waited. I read books such as the novel Greenvoe (1972) or the poetry collection The Year of the Whale (1965) but, although the visualisation of passages - or even just lines of text - came readily, I felt unable to delineate what was in my mind's eye. The writing needed not only a confident illustrator, which I was not, but one who could execute drawings that were fully-formed or realised - I was not ready.

After more than two decades of life’s experience - personal and creative - re-reading the verse bolstered my lapsed interest in the poet's writing and impelled me to re-examine the idea of illustrating the work - I was ready.

To choose one poem from a total of 421 was daunting. But starting with The Storm, my introduction to the poet’s work, I fell upon the last poem in the collection: Orcadians: Seven Impromptus. This sprawling, humorous, dark poem is a portrait of Orkney life and death, delving into the characters that inhabit the landscape. Dedicated to his mentor and champion Edwin Muir, the poem was clearly one he considered worthy of dedication. However, my reason for choosing Orcadians to illustrate was a purely visual one. Each impromptu offered countless pictorial opportunities; I saw the attitudes of the characters and the treeless landscape, backgrounds and foregrounds, the light and the dark; I heard the lifeboatman "laughing at danger . . ." and "the yelp of a tinker’s dog"; I felt the farmers’ mistrust of the doctor "scattering barren wit". It all lay out before me and I was more than ready.

I am immensely grateful to the late Archie Bevan (1925 - 2015), who in the early days of my work on the project was George Mackay Brown's literary executor, and whose kind permission allowed me the opportunity to illustrate the poem.

At the beginning of 2015 I made the last marks on the last illustration for the project, a companion piece for the Chicken impromptu. By this time author, publisher and friend James Robertson had come up with the idea to publish the collection of work alongside the poem as a limited edition hardbound book under the Kettillonia imprint, and with the kind permission of the Estate of George Mackay Brown it was made possible. On June the 10th, 2016, along with the first showing of the completed series of large format paintings and drawings, the beautifully bound and printed edition of Orcadians: Seven Impromptus was launched at the Scottish Storytelling Centre in Edinburgh. The evening was a great success. I felt overwhelmed and thrilled to see the project come to fruition but the greatest emotion I felt was one of gratitude, to all who gave me encouragement and ideas and helped me form what was a long fermenting concept into a solid and beautiful object. If you are interested in purchasing a copy of the book please go to the Kettillonia website:

Since the launch and first exhibition Orcadians: Seven Impromptus has been exhibited as part of the StAnza Poetry Festival in St Andrews in March 2017 and at ArtsMill in Hebden Bridge, West Yorkshire between September and October 2017.
If you are interested in reading a much broader selection of the poet's verse you could do no better than find a copy of The Collected Poems of George Mackay Brown, edited by Archie Bevan and Brian Murray, published in 2005 by John Murray.

A small selection of the drawings from Orcadians: Seven Impromptus were exhibited, as a taster, in my show Lines of Memory at the Atrium Gallery, Glasgow School of Art in 2010 and in a group show at ArtsMill, Linden Mill, Hebden Bridge in 2012.


As mentioned earlier the complete series of original paintings and drawings of Orcadians were exhibited at the Scottish Storytelling Centre from June 8th until July 2nd, 2016 on the Royal Mile in Edinburgh.

Examples of the drawings from  Memoria Histórica and Orcadians: Seven Impromptus can also be seen on these noteworthy sites: 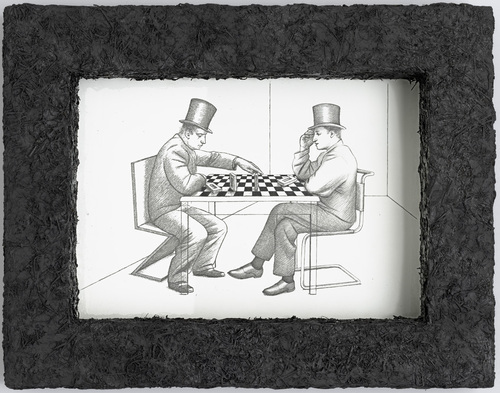